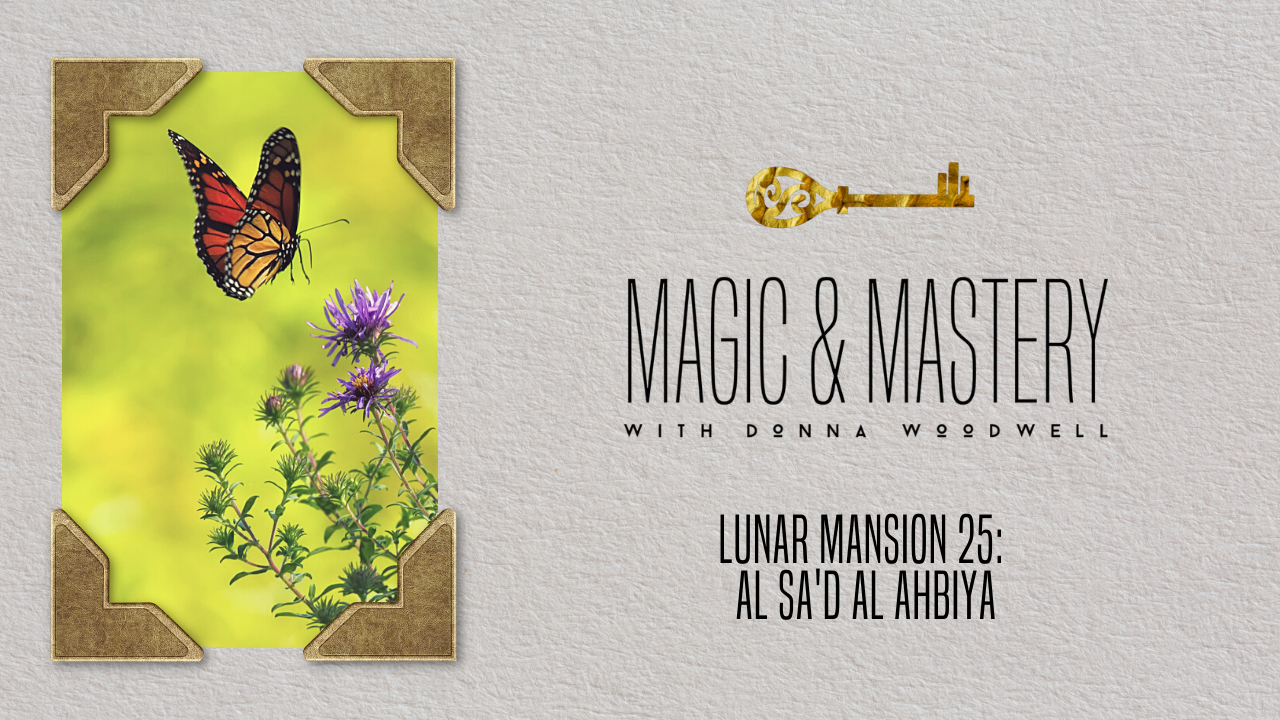 Ancient Name: Al Sa'd al Ahbiya (The Lucky One of the Hidden)

For protection, patience and hope

Do: Have patience. Allow things to unfold when they are ready. Tap into a Source greater than yourself. Have faith and hope.

Don't: Force a situation. Get frustrated if things don't happen as planned.

From al Biruni, 11th Century Sa'd al-akhbiyah is marked by four stars on the the right hand of Aquarius; the outline of the group resembles a duck's foot; three of the stars form a triangle which conceals in its interior the fourth, the lucky one. According to the Arabs these are not the only fortunate stars, for there are many outside the mansions of the moon which are.

Indian Astrology - Good for besieging towns and encampments, for going into a quarrel, for pursuing enemies and doing them harm, for sending messengers. Favours journeys southwards.

Bad for marriage, for sowing, for merchandise, for buying livestock.

Dorotheos - Good for buying slaves, who will be strong, loyal and good, for building, which will be solid and durable, and for voyages, though there will be delays. Marriage will only last for a while. Bad for partnerships, which will end badly and harmfully, and a slave will escape.

From Picatrix, 11th Century The twenty-fifth Mansion is Zaadalahbia, and it is for the protection of orchards and crops from evil happenings. When the Moon has come to it, fashion a seal in fig wood, and sculpt in it the figure of a man in the likeness of one who is planting trees. Cense it with the flowers of these trees , and say: You, Aziel, guard my crops and my orchards that any destruction or ill fortune may not befall them. Place the aforesaid image in one of the trees in the place which you wish to guard. While the image which was made continues there, destruction shall not befall the crops. And know that Aziel is the name of the lord of this Mansion.

From Agrippa, 16th Century Sadalabra. Sadalachia. the butterfly, unfolding 8°34’17″ Aquarius. Helps siege and revenge, divorce, prisons and buildings, speeds messengers, destroys enemies, helps spells against sex or to cause impotence. The preservation of trees and harvests. A man planting.

From Stockinger, 21st Century Mansion 25:  Sa’d al-ahbija, The Butterfly, 8* Aquarius 34’ to 21* Aquarius 25’. Signification: Favourable for protecting houses and to strengthen buildings. Make talismans to protect messengers and to protect trees and harvest.

From Warnock, 21st Century Sa'd al Akhbiyah signifies stability and protection. When this mansion appears, we may need to embrace its stead, grounding energy. In this image, the gardener is planting a tree directly over the spring, signifying that our plantings, our projects and endeavors, must also draw from the source, the water of wisdom and deep knowledge. This mansion advises that we proceed according to the dictates of Nature, rather than those of men, machines and artifice. The barren tree is without access to the spring, the water of life and wisdom. So Sa'd al-Akhbiyah contains this paradox of growth and barrenness. The unguided gardener reaps only weeds. But planting with discernment brings success.