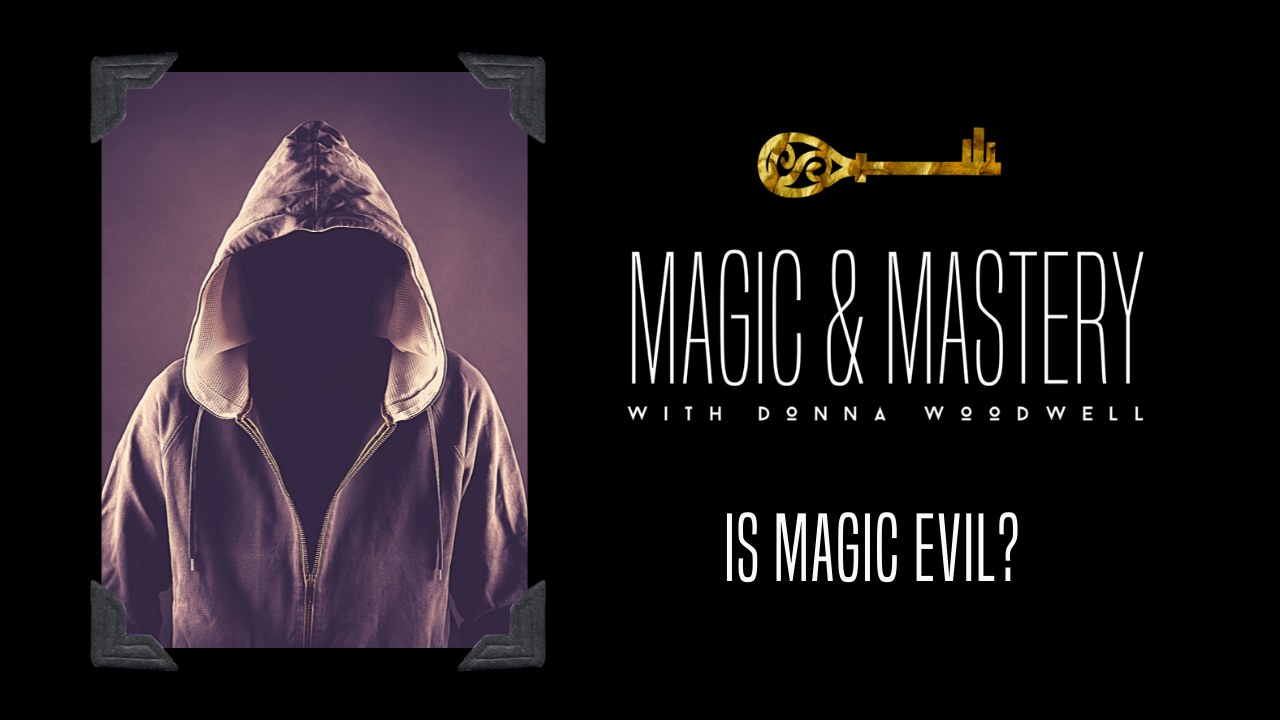 There’s a question often lurking for those new to Magic: “Is magic good?” (Or the flip side of the same question: “Is Magic evil?”)

It would be easy to respond “Of course, Magic isn’t evil. But cosmic questions involving what’s good or evil are never quite that simple.

We can’t answer them truly unless we deconstruct what we actually mean by the words “good” and “evil.”

It’s certainly easy to believe that what’s “good” is what I am doing, and what’s “evil” is what other people are doing. Our egos like to believe they are on the right side of things, no matter what they are doing.

Unfortunately, history is littered with examples of people doing terrible things to one another in the name of “doing good.”

The extreme version of this is linked to a religious definition of good and evil. Good is my own gods or goddesses; evil is a supernatural entity that opposes my side. These stories we tell ourselves about cosmic battles be compelling and motivating, but they rest on beliefs. Just because you believe you are justified in killing others, does that make it true?

A more sophisticated version of this logic might be to define “good” as what adheres to your moral or ethical code of conduct, and “evil” is what violates that code. That definition might sound better on paper, until it meets the messy reality that moral and ethical codes vary greatly.

So, what about linking the concepts of “good” and “evil” to something more tangible? Something good is helpful; something evil is that which purposely causes harm or injury.

That’s a little better, in the sense that it gives us something we could agree on. It’s a logic at the heart of the Golden Rule: do unto others as you would have them to unto you. (Presuming, of course, most people don’t want to be purposely harmed.) It’s the most basic of ethical statements, because it’s the most value-neutral you can make them.

But even this statement runs into its challenges. What if someone is trying to harm you first? Does that make it okay to harm them back? Sometimes there is no harm-free choice; we’re stuck with the lesser of “evils.”

Okay, so now that we understand the stickiness of the question “Is Magic good or evil?” let’s try talking about it directly.

Magic is an innate human skill, the ability to work with forces beyond the physical to create change in the world.

From this point of view, Magic is a neutral ability or skill. Magic could heal or harm. “Good” or “evil” is in the intent of the one using the Magic, not the Magic itself.

We could end the discussion right there, but for many people sifting through layers of cultural conditioning, it’s not that simple.

If you’ve been practicing a belief system that says humans have no business working with any “forces beyond the physical” to create change in the world, it would be easy to call Magic “evil.” If it violates your worldview, “evil” is usually the label it gets.

On the other hand, Magic may be part of a spiritual practice. You could argue that prayer is a religious sanctioned form of Magic. The Eucharist certainly qualifies under that definition, too. Magic used for “good” purposes is acceptable, but not “evil” purposes.

Or perhaps your worldview doesn’t believe in anything at all “beyond the physical,” therefore Magic cannot exist. If something doesn’t exist, then can it be good or evil?

Lots of words to recognize there are no simple answers.

But it’s certainly a question worth pondering, because it will force you to consider how your beliefs determine the labels you attach to things, and these labels often shape how you experience your reality.

And recognizing this IS the first step toward learning Magic.  Magic happens when you learn to shape your own “reality bubble” at will — by changing your beliefs, thoughts and judgements that shape it.

Ultimately, it’s this power that makes Magic so scary to some people. By its very nature, Magic is always whispering “your reality bubble is too small.”

That can feel like an existential threat to those who are attached to their beliefs about what the world is, and isn’t. There is nothing more inherently revolutionary than Magic.

So, the next time you hear yourself pondering the question “is Magic evil?” consider all the beliefs and superstitions that question is attached to. Those are the places that provide the best fodder for contemplation and growth.

In other words, that’s where the Magic can really happen.