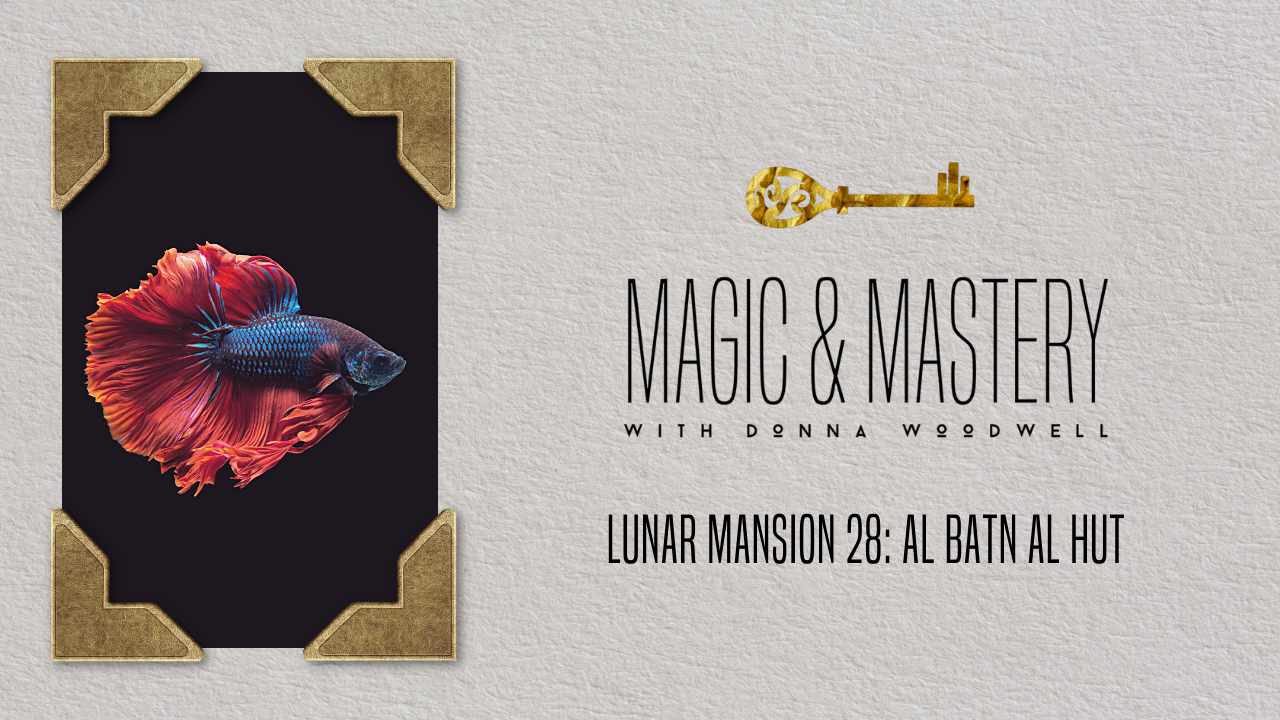 To gather riches and resources

Do: Take stock of what you have achieved. Celebrate the completion of tasks. Be joyful. Ask for guidance. Build community.

Don't: Ignore the gifts you've been given. Refuse help when offered.

From al Biruni, 11th Century  Batn al-hat is marked by two bright stars from the head of Andromeda, near to which is a group of small stars in a curved line, out of which the Arabs make a fish, and these stars are falling into the wide-open mouth of the fish, whence the name belly. Others call this mansion rishi, comparing the fish to a rope, so that the bucket n Pegasus should not lack a rope.

Indian Astrology - Good for trade, sowing and medicines. Good for marriage. Indifferent for journeys, except for middle third of night when bad.Bad for entrusting something to someone, or lending anything.

Dorotheos - A partnership started will begin well but end badly. A slave bought will be bad, irascible and very proud. If captured, he will not leave prison.

From Picatrix, 11th Century The twenty-eighth Mansion is Arrexe, and it is for bringing fish together in one place. When the Moon has come to this Mansion, fashion of brass (which is in one manner) a seal, in which fashion the image of a fish having a colored spine on which you should write the name of the lord of this Mansion. Cense it with the skin of a sea fish; after this, tie a string around it and throw it in the water in the place where you wish the fish to come together. All of the fish in the area around it will immediately gather together about it, and allow you to harvest them. And know that Anuxi is the name of the lord of this Mansion.

From Agrippa, 16th Century Albotham, Alchalh: the fishes, Pisces. 17°08’34″ Pisces   Increases harvests and commerce, helps the safety of travelers in dangerous places, causes marital harmony, but strengthens prisons and causes loss of treasures. To gather fishes together. A fish.

From Warnock, 2st Century When this mansion appears, it indicates that we, too, are in a state of completion. We are ready to reap the harvest of our efforts. Yet we must not be passive. Like the fisherman, we must cast our net into the waters. The fish will not simply jump into the boat. This is also a mansion of faith and guidance. Its appearance confirms that we are guided on our journey, that we will pass through the dangers and obstacles and achieve our goal. The great fish resembles the wishing fish of the Thousands and One Nights. We can attain our heart's desire, if we accept the guidance that is ours for the asking, and ensure that we are active, rather than passive, participants in our journey.